After the 1 million bounty for iOS 9.1 exploits, Zerodium, now the popular cybersecurity firm known for hack trading, recently released a full chart of payouts that they are willing to offer for different zero-day exploits, not only for iOS, but also for Windows Phone, Android, Safari, Flash Player, etc. 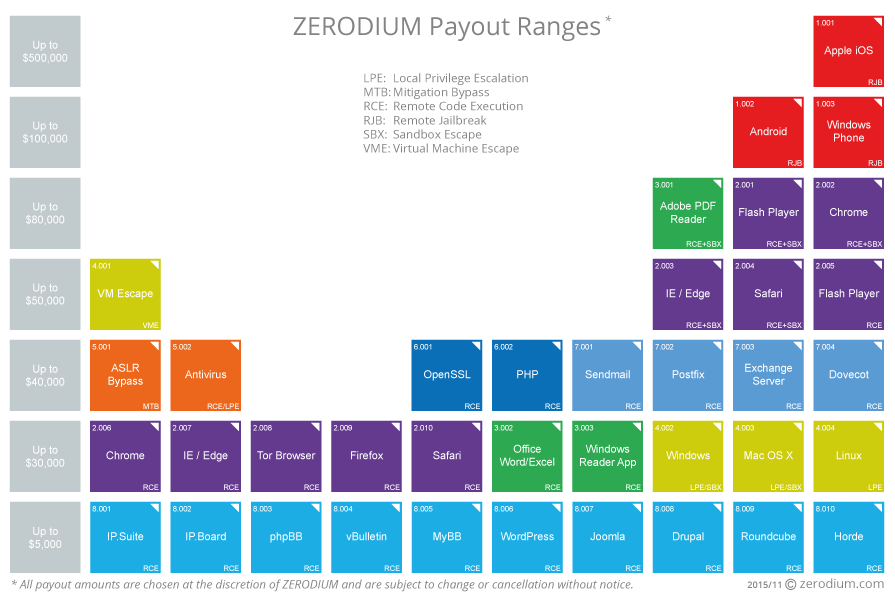 In terms of value, iOS ranked at the top of the chart which is at the tier of “Up to $500,000” US dollars, and that is 5 times of Android and Windows Phone will deem to be less valuable, also give a feeling of the difficulty and technique required for break into these mobile operating systems.

25PP raised an interesting point in their official Weibo, the most popular micor-blogging site in China, that as the need for iOS 9.1/9.2 hyped up upon the soon-arrival official iOS 9.2 release, it seems that the jailbreak teams are facing the dilemma, that is to choose for fame or monetary return as Zerodium offers.

Certainly from a long-term loyal jailbreak user’s point of view, we would love enjoying the benefit and fun of using a public jailbreak to juice up iOS experience. But in the meantime, hackers have their right to take this as a business opportunity to pay back the effort they spent over days and nights.

So what do you see about Zerodium’s action taken up for cashing in and trading the iOS exploits to parties including “government organizations in need of specific and tailored cybersecurity capabilities”? If you were one of the jailbreak team hackers, which side will you pick? Let me know in the comments.