On 5th June, the Pangu Team has successfully co-hosted the Mobile Security Conference (a.k.a. MOSEC) in Shanghai with POC from Korea. One of the biggest and most concerned topic is iOS jailbreaking. The Pangu Team gave a presentation from the technical perspective such as the Bootrom exploit and signature bypass, etc.

But one of the biggest highlights, which was reported by one of the members behind the Pangu Team, a.k.a Daniel_K4, in his personal Weibo account – besides thanking all the speakers and guests – that iOS 8.3 jailbreak demo was being showcased at the end of the MOSEC. Yet, we have little information and further proof on this but the source is very trustworthy here. This news has also been reported by iDigitalTimes earlier today with a Google Translated version of the screenshot below. But here the original, unedited, Simplified Chinese version is being shown for reference.

Additionally, notably speaking, despite of some trusted sources and reports on completion of iOS 8.2 and 8.3 jailbreak tools, there is no word on the exact release date from any of the members of the Pangu jailbreak team yet on their Weibo accounts, as usual. For those who might have seen some claims on such, they are either purely speculations or simply trolls at the moment, like the below tweets (one of them was deleted after being screenshotted). Some users did post the screenshots to the Pangu Team on Weibo but no one came out and said any word. 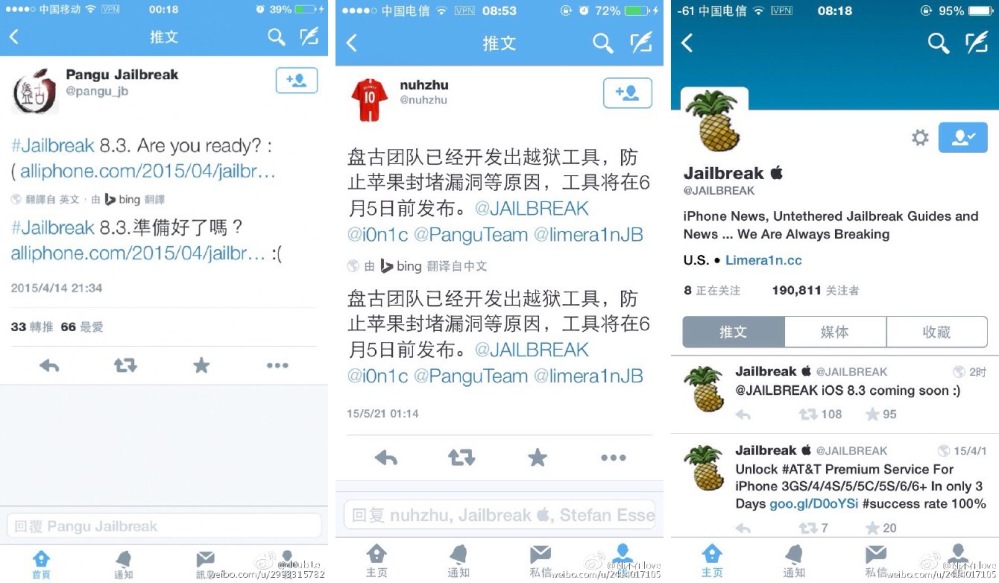 FreeBuf.COM was one of the official Weibo live broadcast partners and there are tons of pictures of this conference as being used above. They also promised to provide more details on the conference and all the presentation files very soon.

Speaking of iOS 8.3 jailbreak, as WWDC is a just a couple of days away and most likely iOS 8.4 will end its beta and be officially released and iOS 9 will come out in beta form, the jailbreak community is really concerning if there is a jailbreak on this latest public firmware. PP (the team behind iOS 8 jailbreak tool for Mac) and 3K Assistant (the partner of TaiG jailbreak) have all given their views on this aspect.

For PP, their post on 5th June started with a question that what will iOS 9 brings to trade for iOS 8.3 jailbreak. Before the MOSEC they were sort of expecting an important update on iOS 8.3 jailbreak. And they also hoping the rumor from @limera1nJB back in mid-May will come true.

On another hand, 3K has been releasing several posts about further security enhancement in iOS 9 and also the rumored “Rootless” iOS 9. In one of the posts, they stated that iOS 8.x jailbreak could be the “Last Supper” for jailbreakers as there has been no further progress after iOS 8.1.2 and 8.2 beta 2 jailbreaks. But they also believe that due to the high level of security brought by iOS 9, it is very likely for any of the teams to release iOS 8.3 jailbreak soon or later after iOS 9 releases. They also commented that for a normal jailbreak users, iOS 9 may not be attractive for them to upgrade to simply for bug and security fixes.

So what’s your take on the iOS 8.3 jailbreak and also the future of jailbreaking? Let me know in the comments.